How to Cook Spaghetti Squash in the Oven

It’s a common (mis)belief that spaghetti squash is difficult to cook. I hear people say all the time that it’s “too much work” and scraping the seeds is too hard. Well, they’re right. It is too hard.

But here’s the secret to cooking spaghetti squash – you don’t have to scrape the seeds first.

You’ll want to use a large, sharp knife for this. Spaghetti squash can be a little bit awkward, as they are round in shape and can roll around. I use one hand to hold the spaghetti squash still (tightly) and use the other hand with the knife to press down into the squash.

Sometimes I find that bringing the cutting board and squash close to my body and pulling it in tightly allows me to push down with the knife easier and get through the skin, which you can see in the video.

Do not try and scrape out the seeds and insides of the squash at this point. Let me repeat that louder for those of you in the cheap seats:

DO NOT SCRAPE THE SEEDS.

Line your baking sheet with parchment paper and place the two spaghetti squash halves face down on the pan, then add the water.

What we’re looking for is moisture underneath the squash to help steam it in the oven. This can still happen even if it’s with damp parchment paper!

3. Cook the spaghetti squash in the oven.

We’re going to cook the spaghetti squash as-is, no scraping necessary. Just stick it right in that preheated oven and let ‘er go. Trust me on this one.

You may need to adjust cook time depending on the size of your squash. The 30 minutes is based on a medium sized spaghetti squash. If I have a smaller one I will often reduce it, and larger ones can need a bit more time.

Use the “squeeze test” to see if it’s done. Give the sides a gentle squeeze. If the skin gives under a bit of pressure, it’s done cooking. If it is firm and resists you, it needs a bit more time. Once it’s done, remove it from the oven.

4. Flip the halves and cool.

If you leave the halves face down on the paper, they will stay hot for a LONG time. They’ve built up a lot of steam inside, and the outer skin doesn’t allow the heat to escape.

We won’t be able to handle them immediately, but we want them to cool enough that we can handle them, so we can get the spaghetti strings out.

5. Scrape out the seeds and guts.

Once your halves are cool enough to handle, we are going to scrape the seeds out. They may still be hot on the outside; I often hold them in a potholder to make it easier.

I didn’t take a picture of the cooked halves pre-scraping because I’m a dummy. You can see them in the video. The center will be soft, and when you scrape with a large spoon, it will easily separate from the edible part.

Scrape the seeds and guts into the trash or compost. Some of the edible portion may start to scrape away; this is ok! Just focus on getting all the seeds and pulpy part out, like a halloween pumpkin.

Once you’re done scraping the seeds, they should look like this:

6. Use a fork to shred the spaghetti squash into “noodles.”

Confession: the novelty of this never wears off on me. Such a silly thing, but I love scraping out spaghetti squash with a fork.

Hold your squash in one hand, and have a container ready that you’re going to store your squash in, whether it’s a bowl, tupperware, or something else.

Using your other hand, take a fork and gently scrape the inside of the squash. Work in layers – don’t try to scrape it all out in one big chunk, or you won’t get these pretty little individual strings you see here.

7. Use now or store for later.

Scrape both halves until you are left with just the empty skins. You may need to use the side of the fork instead of the tines to go around the inside edge, and these parts may not come out as perfect “strings.” That’s ok! Get all the insides out and toss the skins.

8. Decide how to use your cooked spaghetti squash.

I make spaghetti squash regularly in my weekly cook up, so I have it on hand to use in any number of ways.

You can keep it simple, with just some sauce and meat on top, or make a dish or casserole out of it! Here are two of my favorite spaghetti squash recipes to get you started:

However you decide to use your squash, rejoice in the fact that you no longer have to scrape the seeds before cooking. If you’re anything like me, you’ll start making these once every week or two to have on hand.

Spaghetti squash can vary widely in size. Depending on the size of your squash, you may need to decrease or increase cook time. The squeeze test is my go-to - if I give the squash a gentle squeeze and the skin gives, then it's done. If it feels firm and resists, it needs a bit more time.

When you scrape the seeds out, some of the "spaghetti strings" will start to come out too. That's ok. Get to a point where you've gotten the seeds and "guts" out, then start scraping the edible part. 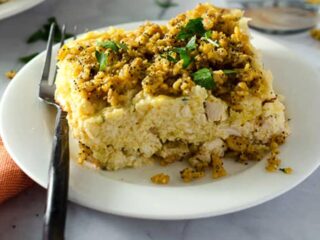 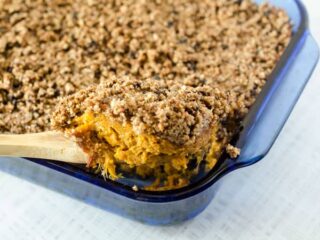