Home » How-To » Everything You Need To Know About Shishito Peppers

Everything You Need To Know About Shishito Peppers

Home » How-To » Everything You Need To Know About Shishito Peppers

Shishito peppers are a thin-walled pepper that hail from Asia and are tender and sweet. They make a great appetizer and are incredibly easy to cook!

What are shishito peppers

Shishito peppers come from Asia. They are a thin-walled, small and slender pepper. They turn from green to red when ripe, but are most commonly harvested when green.

One in every ten shishito peppers is said to be spicy. Their thin skin blisters and chars easily, which makes them easy to cook!

How do you grow shishito peppers

You can sometimes find starter plants of shishito peppers, however, they are very easy to grow from seed.

Start your seeds indoors about eight weeks before spring. The seedlings like warm soil at first. I typically give mine a seed tray with a clear lid that makes a little “greenhouse” in a sunny window.

Once they get strong enough, I do what is called “hardening off” – getting them ready for the great outdoors. I start putting them outside for short spurts at first, then longer and longer each day.

When you choose a spot to plant them, you’ll want to make sure it gets full sun, about 6-8 hours a day. The shishito pepper plant is disease and pest resistant for the most part, and thrives in warm weather.

When do you harvest shishito peppers

Shishito peppers will turn from green to red, but they are most often picked while still green.

Look for them to turn a deep, dark green color before picking. I like to use scissors or shears to clip them off the plant, as the stalks that attach them can be a little tough to pinch through or snap off sometimes!

How to make roasted shishito peppers

Funny that you ask, I wrote a recipe on exactly that! You can find my recipe for Easy Roasted Shishito Peppers here.

Spoiler alert: They are one of the easiest things in the world to make. They take literally 5 minutes and 2 ingredients other than the peppers: oil and salt.

How to make shishito peppers in a pan

If you prefer to cook your shishito peppers on top of the stove, or don’t have access to an oven, you can do that. The process is almost exactly the same.

You’ll want the pan on medium-high heat so they will blister. Too low and you’ll miss the blistering; too high and they will burn.

Use a high-heat tolerant oil or fat such as avocado oil or ghee. Heat the pan, heat the fat, add the peppers, and allow to cook, turning frequently to avoid burning.

Once they brown and blister, remove them from the pan, sprinkle with salt, and serve!

Where can you buy shishito peppers

I usually grow mine – they grow well in the summer season, and if you get the right soil, they will proliferate.

If you don’t have the ability or the desire to grow them, you can usually find them at farmer’s markets in the summertime. Trader Joe’s also sells bags of them seasonally in their refrigerated produce section!

When are shishito peppers in season

Shishito peppers are typically in season during the summer, when peppers grow well.

They don’t like it TOO hot – sometimes the temperatures here do stop them from producing for awhile, and then when it cools off in the fall they come back.

Keep in mind, I’m in Charleston, SC – “cooling off” to us is when it dips below 90 degrees!

What goes well with shishito peppers

Honestly, shishito peppers are great all on their own. They’re mild and slightly sweet (as long as you don’t hit the 1 in 10 fireball) and they roast up perfectly.

If you want to dip them in something to add more flavor, the sky is the limit. Here are some ideas for dip flavor combinations that would keep it paleo: 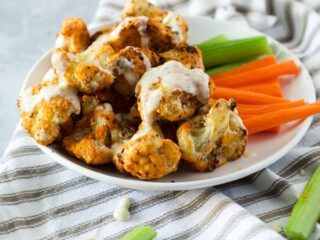 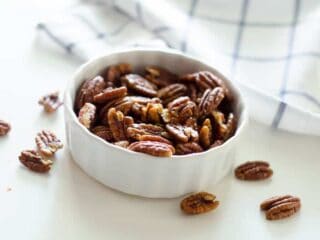 I grew Shishitos from seeds I harvested in last year's plant that I bought from a garden center. Some of my plants this year have peppers that do not resemble shishitos at all! I think I must have gotten a hybrid. And I too have had the 'delight' of biting into a hot one - yowza! Looking for more recipes using these babies!

HI Cynthia! That's so resourceful of you - I love that you saved the seeds and grew more plants. Shishito plants were hard to find this year, so you were one of the lucky ones able to grow them. That's interesting about the other type of pepper - what do they look like? I wonder if they cross pollinated from another plant in the area. Try experimenting with some dipping sauces for the roasted shishitos - it can bring a lot of different flavors to the table!

I love spicy Indian food and grow Serrano and Cayenne peppers for my dishes and grew Shishito peppers first time this season and I love their intense (not hot)pepper flavor.they are mild.I also grew Hungarian black peppers for first time this year and they are mildly spicy and best eaten fresh.Next season I will grow these four pepper varieties for their spice. I grow them in homemade half barrel raised garden beds and this year is my first crop using them and I couldn't be happier with my crop. I do let them turn red because to me they are sweeter. I have read that it you grow a hot pepper next to a mild one they can cross pollinate but mine did not do it and they were grown together.

Hi Robert! I love your pepper variety! We grew cayenne this year and it makes SO MANY peppers. We have no idea what to do with them all! We're experimenting with a hot sauce recipe. I haven't heard of hungarian black peppers but now I definitely want to try growing them. I've had my jalapenos cross pollinate with my shishitos in the past. My guess is that it has to happen when the pollinators are working with the plants early on, before they get really established. Thanks for your comment and pepper recommendations! \

TheRe is so much misinformation on the internet I have eaten hundreds of shishito peppers and have never had a hot one. Nor has anyone I’ve ever talked to.

Hi Jay, Thanks so much for your input! I personally have had the experience of getting a hot shishito pepper, and so have my husband and many friends of ours. I'm sorry you haven't gotten to have that particular experience in life just yet, but I imagine there are many other things out there that do in fact still exist despite you personally not having seen them. I wish you the best of luck in the future for acquiring a hot shishito pepper!

Can Shishito Peppers be Dried, Frozen, or preserved in any way?

Hi Douglas! This is a great question. Shishito peppers are a fairly thin walled pepper. You could certainly freeze them, however, when defrosted, they would come out limp and not retain their shape. I have not tried roasting a previously frozen shishito pepper, so I'm not sure how that would turn out. If you try it, be sure to let me know!

My plant is a prolific producer in full sun. I like to stuff the peppers with sausage meat, and saute them. Just cut off tops, run a sharp knife round the inside, and tease out the seed "hub", then push sausage meat - or seasoned hamburger meat - in with one finger. Saute over medium heat. Mmmm

Cooked meat or raw? If raw, don't the peppers over cook?

That sounds delicious! Thank you so much for sharing!